On the Cover: Jean Batten 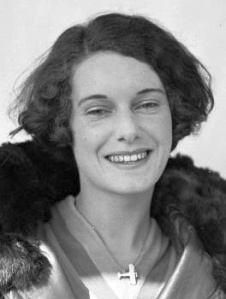 New Zealand? Ever look at the pilots in small planes (or ‘flying pencils’ as some call them) and be caught up in the romance of an early twentieth century boys/girls-own adventure type fantasy?

Jean Batten knew exactly how far it was from ‘Home’ (England) to her homeland (New Zealand) because she lived that adventure. She dreamed it and she achieved it.

Jean flew 22,530 kilometres from one side of the world to the antipodes – by herself. Solo. Alone. Navigating the skies in her tiny plane, and sitting alone in the darkness for her record journey. She was 27. You can read her story on pages 10-17 of Great Kiwi Firsts.

I was intrigued and inspired by Jean’s story, so it was rather lovely that the image of her landing in Croydon was chosen as the cover image for the book.

As an aside, her amazing journey was recreated recently. Read here about the three-week venture recreating Jean’s record-breaking flight; Jean finished her flight in 11 days and 40 minutes. Jean flew without radio, without life-raft and without modern tracking systems. She was a true Great Kiwi (and world) First and she is one of my heroes.